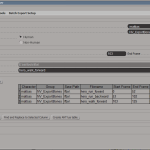 This exporter is one of the oldest and most used tools I created. Its primary function was to export animation assets, but it also handled some everyday scene management.The export process was built around a data table, which was saved inside the scene file. This allowed any number of animations and characters to be in a single scene file. And because it was part of the scene, I could access the data with other tools, such as the batch exporter.An animator entered the appropriate settings for an animation and added it to the table. Once in the table, they could jump to that animation’s time range, mass edit columns, and export any number of the animations. 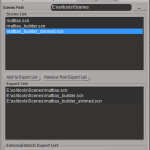 Many times during development, there was a need to re-export large groups of animations. My solution was to create this batch tool, which worked with the exporter’s data tables. Through the GUI, a list of scene files would be compiled and a text file created. A BAT file would then launch XSI in command prompt (no UI) and run the list through the animation exporter. It was a work horse that was adapted by the tech artists to handle mass changes to models and shaders.